A typical day for me the last four years, consists of daily trips to parks, making snacks, cooking dinners, changing nappies then toilet training, hopefully getting six hours unbroken sleep a night and maybe having a shower at some stage of the day.  And what about my home, well, that’s kept as clean as the gaps in the day allow.   I had twins at the age of forty-two and found myself parenting alone.

If I was to listen to other mothers in the parks, playgroups and coffee shops saying everything is grand, I will scream till my head blows up.  How can everything be grand and why do they lie?  I am here to tell the truth about motherhood.  Whether you are twenty-two or forty-two been a mother is exhausting, challenging, frustrating and hard work.  And double all that when its twins.

Yes, there is the nice side of it, which is unconditional love, never been lonely, fulfilment and happiness but before you get there, the first years can be traumatic or GRAND if you’re a good liar.

My twins are a boy and a girl, I have a fifteen-year-old son as well so I know what boys can be like, girls on the other hand are a different kettle of fish.  My sons have never given me much to worry about, so far.  My daughter however has been such a challenge from the start.

If I was to sit on the couch all day, she would be on it to. She is very loving and funny when she is not in a mood but sensitive with a capital S.  I can understand a little why men don’t understand women, it’s just the way we are born.  I have seen it first hand with my daughter, she is so the opposite of her twin brother.

The shock alone of expecting twins nearly sent me over the edge but somehow, I pulled through.  I have had a few life changing experiences in my life so far but parenting twins is by far the most challenging.  This word “challenging” I use a lot as for me it sums up my how my life has been.  I didn’t know anyone close to me at the time bringing up twins so it has been a very different experience than having my first child.

The lack of communication with the outside world when you are in your baby bubble is tough.  When you’re an older mother, usually the grandparents will be older to, meaning less help and encouragement.  I had my first child in Australia in 2002 and I felt very isolated and alone when he was a baby.  I came back to live in Dublin in 2005 after been away for nine years as I wanted to bring him up near my family and friends.   He was three and a half when I returned.  I had good support with him, this time round I feel the way I did when I was in Australia.

I suspect a lot of mothers feel the same as me and pretend that all is grand.  Whether it’s the lack of support, the loneliness, been so overwhelmed, fatigue, amongst many other issues, I wonder why mothers are not more honest about how it really is.  I can honestly say I have felt all of these and more and remember each Groundhog Day and each night feeling like a human jack-in-the-box.

Yes, motherhood is wonderful but it takes hard work, sacrifice, many sleepless nights and the patience of a saint.  Three hours sleep a night…. sure it’s “Grand”, isn’t it.. 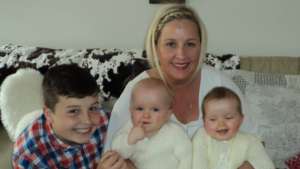